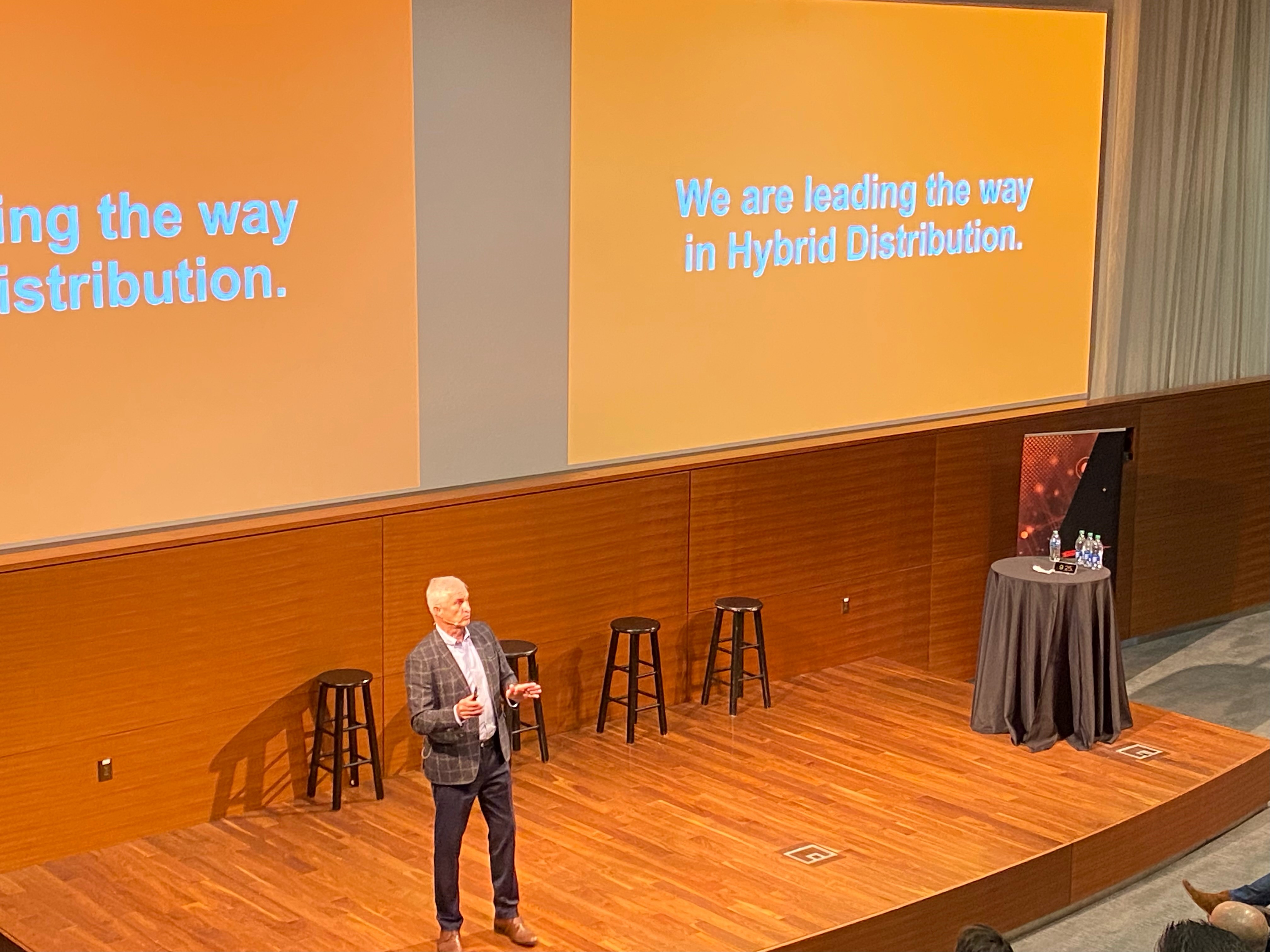 ScanSource and Intelisys’ inaugural Greenville Growth Summit recently took place from December 13-15 in Greenville, SC. Sales partners and suppliers joined Intelisys/ScanSource colleagues and leadership for the three-day networking and education event. The first half of the Growth Summit showcased the many programs, tools and resources available to Intelisys’ sales partners to help them scale their business as the marketplace continues to expand in 2022, while the back half of the event focused on opportunities for suppliers. As the shift to recurring revenue, connectivity, and cloud grows at a rapid pace, ScanSource and Intelisys are poised to position partners for success – delivering the hardware, software, and connectivity to partners in the manner their end users want to consume them. Throughout the event, participants had the opportunity to attend in-depth workshops, hear from, and network with top leaders from within the ScanSource/Intelisys ecosystem.

ScanSource Chairman and CEO, Mike Baur, personally kicked off each morning of the Growth Summit, discussing what it will take to accelerate and drive long-term sustainable growth in the Channel, as well as the exciting evolution in the UCaaS, CCaaS, and cloud computing spaces as a result of remote and hybrid work. Partners heard from Intelisys President and Channel veteran, John DeLozier, as well as ScanSource Chief Revenue Officer, John Eldh. Paul Constantine, Intelisys’ Executive Vice President of Supplier Services, also hit the stage, welcoming five up-and-coming suppliers who presented opportunities around security, PSaaS, CX and cloud. Day one wrapped up with a phenomenal networking dinner in downtown Greenville where sales partners and suppliers came together to discuss new and exciting opportunities in the fast-growing markets that ScanSource and Intelisys serve. The Summit also featured a thrilling partner event at the BMW and MINI Driving Experience, held at Spartanburg, SC-based BMW.

“We selected specific high-growth sales and supplier partners to join us for a conversation about the future of Hybrid Distribution,” said DeLozier. “We orchestrated conversations about the potential for growth, our strategic plans and current momentum. It was a 360-degree experience with the right amount of education, dialogue, networking and fun.”

Here are what partners had to say about the Growth Summit:

"Great way to kickstart the new year, including updates from the leadership team, getting introduced to some game-changing new suppliers, and spending quality time meeting with a few established suppliers!"

“The ScanSource/Intelisys Growth Summit was an excellent use of my time. It was great to see Intelisys putting a concerted effort into helping us grow. We were able to meet the people behind some of the great resources they currently have and some that will be rolled out shortly.”

"It was a great event! I had the opportunity to interact with key executives from ScanSource and Intelisys. I also had a chance to meet several key, strategic suppliers that are relevant in our world. The excursion at the BMW Performance Center was a blast!"

"The Growth Summit was fantastic! The content that was delivered by the ScanSource and Intelisys executive team provided a number of ideas on where they are seeing phenomenal growth. It was also pivotal that I got an opportunity to spend time with other partners across the country to capture some of the best practices and initiatives that they are deploying to grow their company!"